After visiting Mark in Brooklyn, Marketing Manager Kevin Guo of Guangdong OPPEIN (also known as OPTIMA) Home Group Inc. was goring to rush to the next stop in full stride —- San Francisco.

San Francisco, officially the City and County of San Francisco, is the financial and transportation center of the San Francisco Bay Area, a region of 7.6 million people which includes San Jose and Oakland. Today, San Francisco is one of the top tourist destinations in the world, ranking 35th out of the 100 most visited cities worldwide, and is renowned for its cool summer, fog, steep rolling hills, electric mix of architecture, and land marks including more than 30 international financial institutions, helping to make San Francisco rank 18th in the world’s top producing cities, 8th in the United States, and 12th place in the top twenty global financial centers. (Source from Wikipedia .org) 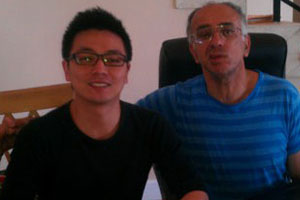 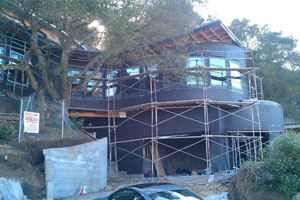 High-end Luxury Villa is under Construction

On May 6th, in the morning, OPPEIN marketing manager Kevin Guo came to visit Ayoub in the renowned San Francisco who is the owner of Construction Company, and specializes in villa Kitchen Cabinet projects. Last year, OPPEIN had the opportunity to have a successful and happy cooperation with him. This year, he is still going to cooperate with OPPEIN again and import OPPEIN Kitchen Cabinets into the Villa which is now under construction. During the conversation, he stressed that OPPEIN Kitchen Cabinet Products would have a great market in the Kitchen Furniture Industry of San Francisco.

At the end of visit, Ayoub introduced some kitchen cabinet agents locally to us and said” After visiting OPPEIN products in Nasser Exhibition Hall, the first thing that came to my mind was that I have to introduce you OPPEIN to my friends and tell them how fantastic your products are !”From the leading cabinetry manufacturer in Asia to a conglomerate which can manufacture almost all home upholstery products, OPPEIN started his trek to world fame with continuous efforts and praise from customers

OPPEIN Travels Through America, B2B Projects in the Region