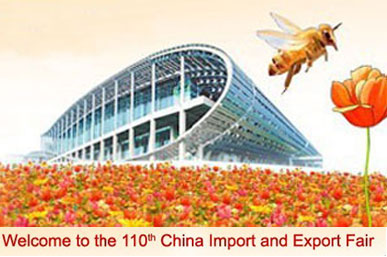 Oppein will continue to take part in the 110th China Import and Export Fair.Our booth is still 11.2A20-21 and 11.2B03-04.We believe that this fair will bring a great opportunity for us to explore the possibilities of establishing business relations with you as well as friendship.Welcome to visit us.

OPPEIN these impressive results not only depend on the advanced production technology and Management Concepts, but also the outstanding team. Development of enterprise can’t be separated from large amount of excellent talented person. (more… )

Zhang Guangning visited our booth, giving the enormous affirmation and encouragement for OPPEIN .

Chinese President Hu Jintao has urged the China Import and Export Fair, also known as the Canton Fair, to contribute more to the improvement of the country’s openness to the outside world. (more… )

China’s entry into the World Trade Organization (WTO) marked a new stage in the development of the Canton Fair. Since then, the fair, or China Import and Export Fair as it is formally known, has shifted its focus from increasing volumes to elevating the quality of products. (more… )

China will continue to deepen its opening-up strategy, and increase imports while stabilizing exports in order to promote trade balance, Premier Wen Jiabao said at the opening ceremony of the fair in Guangzhou, capital city of south China’s Guangdong Province.(more… )

GUANGZHOU – The outlook for Chinese exports in the months ahead is not optimistic, despite a strong willingness from global purchasers participating in the Canton Fair, said the Ministry of Commerce on Thursday.(more…)

The event, held in the Guangdong provincial capital of Guangzhou (previously known as Canton), has also witnessed how China has grown.(more…)

Canton Fair is held by china import and export fair in the spring and antumn seasons each year since the spring of 1957 in Canton(Guangzhou)China.The Fair is co-hosted by the Ministry of Commerce of China and People’s Government of Guangdong Province,and organized by China Foreign Trade Centre.

The Fair is the largest trade fair in China.Among China’s largest fairs,it has the largest assortment of products ,the largest attendance,and the largest number of business deals made at the fair.In the Autumn Trade Fair this year, Oppein also brings some of the exhibits of excellent quality and beautiful design like kitchen cabinets,wardrobes and so on.Our booth is 11.2A20-21 and 11.2B03-04.We are pleased to enter into business relationship with you to our mutual advantage and benefit.We look forward to your visit.

The 110th Canton Fair is divided into three phases.