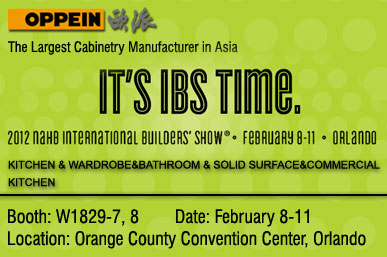 2012 International Builders’ Show is going to be held in Orlando from February 8 to 11. This show is organized by the National Association of Home Builders (NAHB). This time, our Booth is W1829-7, 8. Exhibition Hall is located at the Orange County Convention Center, Orlando, FL Halls West Hall A-D. At the show; we will display our best exhibits for attendees from over the world. We are looking forward to meeting you!

IBS is the largest light construction building industry tradeshow in the United States. It is the only event of its kind, focusing specifically on the needs, concerns, and opportunities that face builders. In 1944, the NAHB held its first annual convention and exposition, later becoming the International Builders’ Show in 1998. From its early start, the show has grown to attract more than 100,000 attendees. Known as IBS in the building industry, the show has alternated its location since 2003 between the Orange County Convention Center in Orlando, Florida and the Las Vegas Convention Center in Las Vegas, Nevada.

The New American Home 2012 is designed to take maximum advantage of Florida’s friendly climate. Walls of movable glass panels and motorized screens provide a seamless flow from the indoor to the outdoor spaces.

At 4,181 square feet, the home will be the smallest in The New American Home series in many years. It will be displayed as a two-bedroom floor plan that will appeal to empty nesters, and will have four additional rooms that could be converted to bedrooms if needed.

The New American Home 2012 on an infill site in an older neighborhood is close to downtown Winter Park. Amenities within walking distance include shops, restaurants and a public library.